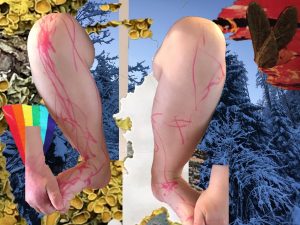 The public emanations of Noa & Snow are writing studios. There, the audience is invited to write, draw, doodle around, pen in hand, pen-siveness deployed. Everything taking place in the space is to be considered poetry.

To write with, to dance at the brink of each other, to sooth scorpios and lions alike, to read and embrace the retrogrades that seem to pile up during these dog days of summer, but together. A deep hanging out of sorts, Breakfast Inside Of A Waxing Gibbous Moon acts in vain in the alleyways and breakfast corners of Wiesenburg. Noa & Snow poem#4: a follow spot, an anticipation, a point of dew, an erotic assembly, a blinking dance.  À cheval between languages: an oscillation, une figure qui disparaît, a dance of lights that light and dance: the sensuality of these dances crosses fields of picnics. Noa & Snow poem#4: a literary dance piece, un océan d’amour, a library, a cut, a pause, un bébé. A meditation, a fling, a house-hole, a hold-up of a house. Noa & Snow poem#4 strips the writing away from the dance, in chains, in lights, beaming, vaping.

special thanks to Elizabeth Ward and her astrological insights.

Noa & Snow is a project funded by the FWF (the Austrian scientific fund) via PEEK, program for arts-based research, project AR 553.
co-produced by Tanznacht, Berlin, boite de productionboite de production is supported by The Creative Europe Programme of the European Union through Life Long Burning, Kulturabteilung der Stadt Wien and DANCE ON TOUR AUSTRIA – A cooperation between Tanzquartier Wien and the Austrian Ministry of Foreign Affairs
management mollusca productions for boite de production