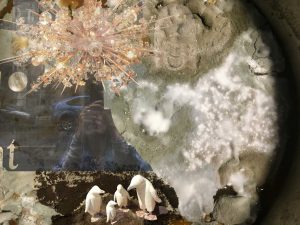 Noa & Snow is a project funded by the FWF (the Austrian scientific fund) via PEEK, program for arts-based research, project AR 553.

Poem #6, a public opening in the form of a publication. A publication in the form of a collective poem. A writing and dancing fellowship formed by Alix Eynaudi, Christian Kosmas Mayer, Robert Trappl, Herbert Justnik and GPT-3.
Poem #6 is an iteration of Noa & Snow, a gentle experiment between the everyday and the event. This research project aims at exploring the capacities of poetry to ignite imagination across several writing modes and genres in order to shed some light on the possible articulations between performance practices, writing practices and poetry.

I laid a thought on a ground, it germinated into an ancient heap of fungi. Appetizers in a deep umbrella-reversed form where the tip reaches into the ground providing a hamac for thoughts and words and dances. An element of fear permeates the fabric of movements. I move things everyday, i wear words everyday, words let me wear their skin, a loan. Words are in debt of my skin, do words have second thoughts? second skins?
Sewing inside of a book i read. I read through a time which hasn’t become an event yet, which resist the eventification. How can we delay the thing from being an event?
Some sort of grotto of a library, with its red soils and crevices. Slow infiltrations on a finger leaking, dipping in a stone-hole. A hut, a finger’s shelter. A wood from which i warm myself as i tear apart the plancher, board by board, listening to our creakings.

This May assembly, this poem, will look for words, listen with the flesh of words through its chaotic composition of algorithm and dancing beings, researchers and floating curators.